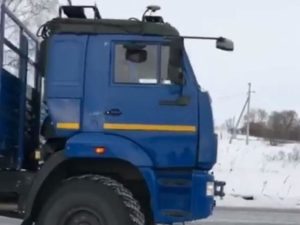 Unmanned KAMAZ truck launched at the “Listvyazhnaya” mine in the framework of the “Digital mining enterprise” innovative project. Its result should be the creation of an entire system of unmanned transportation of coal in the Kuzbass by December 2020. “I drove in the cab of this KAMAZ, which controls itself independently”, – shared his impressions the Deputy Governor of Kuzbass for Industry, Transport and Ecology Andrey Panov, calling the trip unusual and comparing the feeling with the realities of the future.
⠀
The system of autonomous driving in the KAMAZ-43118 makes it possible to transport cargo without drivers or increase working time due to the active driver assistance system, saving operating costs, eliminating the human factor.
⠀
The list of functions of the truck – adaptive cruise control with the “stop and go” function, intelligent speed limit, automated traffic, obstacle avoidance, assistance in changing lanes, cruise control with response to terrain and much more. The truck is able to overtake with further restructuring, traffic on road signs, travel intersections.
⠀
The vehicle control unit consists of four multi-megapixel machine vision cameras, four lidars, two radars, four inertial assemblies, two high-precision satellite navigation receivers, a 16-channel sonar sensor system and other equipment. Machine vision provides the probability of building and performing a safe route at the level of at least 99.99%.
⠀
Test operation of the latest technology will continue until the end of January 2020.