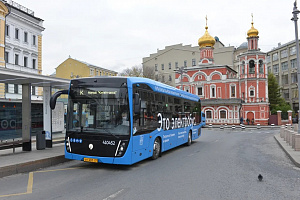 KAMAZ successfully fulfilled another, the fourth in succession contract for delivery of a batch of electric buses to SUE Mosgortrans.

According to the terms of the contract concluded at the beginning of 2021, the company in batches delivered 350 electric KAMAZ-6282 buses to Moscow. As before, the contract stipulates for 15 years of maintenance of the delivered vehicles till November 30, 2036. To add to this, 2021 saw the first supplies of electric buses assembled at the Sokolniki Car Repair and Construction Plant – KAMAZ’s assembly facility in Moscow. The first buses assembled in Moscow started running on the routes already in June, two months after the assembly had been launched.

To date, one thousand electric buses operate in different regions of Moscow, 750 units of them are made by KAMAZ PTC. They serve 67 city routes. Since the start of their operation, they have travelled more than 60 million km in total and carried more than 150 million passengers. The innovative transport enabled to cut the amount of emissions by 600 thousand tonnes in the capital, and, with account of positive experience of operation of the electric buses, Moscow plans to continue purchasing them.

For its part, KAMAZ preliminarily included the production of 450 electric buses in the 2022 Business Plan and plans to participate in a new tender for their delivery to Mosgortrans. Besides, the engineers of the KAMAZ R&D Center do not stop improving customer properties of the electric bus and have already introduced a number of improvements to raise the quality of passenger service and comfort.

Besides, the company developed an articulated model of the electric bus (an accordion). Nowadays, it is undergoing tests in Moscow on Route t34. In case of a successful test drive, the city intends to purchase such a bus for routes with high passenger flow. 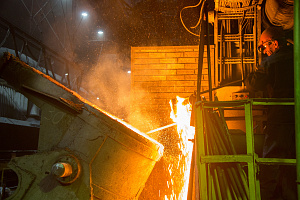 The iron casting building of the KAMAZ foundry will be transformed into Iron Casting Production Competence Center. The corresponding order was signed by Zhanna Khaliullina, Deputy General Director of KAMAZ PTC for HR Management, Organizational Development and Corporate Governance.

First of all, changes are expected in the production staff. Besides the existing four production departments, there will be a repair department, a quality assurance group, a design and technology department and several other divisions. According to experts, with many facilities added, there will be no additional recruitment of workers. All changes will be introduced with existing human resources redistributed inside the plant.

This process structure is more rational and efficient. It helps unite different departments, focus on a single result and teamwork. All this is reflected in the goals of the project. In addition, the performance indicators of the project include reduced labor costs for the production of iron castings, a lower cost of sound castings, decreased staff turnover, and increased wages for workers. 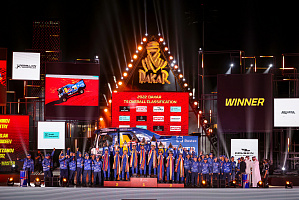 The crews of the KAMAZ-master team swept the podium in the 2022 Dakar race. This is already the 19th victory of the Russian team in the toughest international rally.

This year saw the 44th edition of the Dakar Rally, which included 12 stages. The length of the route was 8,375 kilometers, of which 4,258 kilometers were special stages.

If we go back to the first days of January and follow the course of this year’s race, we can safely call its outcome a confident victory of the KAMAZ-master team. There was no place for a happy occasion, from the very beginning it was a triumph of the KAMAZ racers’ highest professionalism in alliance with the reliability of KAMAZ trucks. The crews of KAMAZ-master from the very first days took the leading positions and made every effort not to let competitors in the TOP-3 in the overall standings of the race.

There were twelve victorious stages of KAMAZ-master out of all twelve stages of the most difficult rally on the planet. As a result, in the general classification, four crews of the KAMAZ-master team took the first four lines of the standings.

By the start of the penultimate stage, the KAMAZ-master crews had created a comfortable advantage over their competitors and eliminated the risks in the race on the final days – reliable passing, and not chasing the result at any cost, came to the fore. By the end of the race, the main question was who of the KAMAZ representatives would become the winner. In the general classification, the struggle for the Golden Bedouin trophy seriously escalated. After the penultimate eleventh stage, the leaders of the standings Dmitry Sotnikov and Eduard Nikolaev were separated by only 8 minutes. But, despite the victory at the penultimate stage of the race, Eduard Nikolaev did not manage to close the gap and get ahead of Dmitry Sotnikov.

By way of reminder, this year two out of four KAMAZ-master crews drove KAMAZ-435091 trucks of the latest generation K5. In 2021, they created a sports version of the KAMAZ-54901 long-haul tractor, which a year earlier had been commercialized and already gained confidence and popularity among Russian customers. The fact that Dmitry Sotnikov and Eduard Nikolaev, who were driving exactly the K5 generation trucks, became the leaders of the race, speaks for itself.

This year’s race served to demonstrate another aspect. It has not passed without a case, which proves that in difficult situations KAMAZ-master acts primarily as a team. At one of the last stages, Eduard Nikolaev, only 10 minutes behind Dmitry Sotnikov in the general classification, could not stop, letting the crews of Andrey Karginov and Anton Shibalov following behind haul out Sotnikov’s crew, which had got stuck. But Nikolaev helped Sotnikov. The KAMAZ-master crews put team interests ahead of personal ones.

Today, overnight Sunday into Monday morning, the KAMAZ-master team is returning home. Traditionally, at the Begishevo airport, the drivers will be met by the leaders and representatives of KAMAZ, the administration of the city of Naberezhnye Chelny, friends, family and relatives, as well as ordinary motor racing enthusiasts and fans of the team.