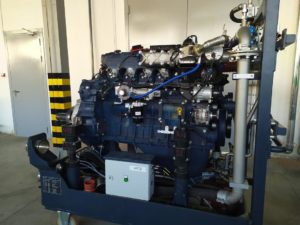 Following the diesel inline engine for the KAMAZ trucks of the K5 generation, the company has begun research tests of a prototype inline gas engine that uses natural gas as fuel. Today, the development of R6 gas engines for prime movers is underway. In the future, it will be possible to install them on all modifications of vehicles of the family.
⠀
Preliminary results of tests of the prototype of the KAMAZ R6 gas engine on the assessment of emissions of harmful substances with exhaust gases showed the achievability of environmental standards “Euro-6” which is possible thanks to applied in the design of exhaust gas recirculation (EGR) and three way catalytic neutralizer.
⠀
The rated power of the new engine is 450 hp, the maximum torque is 1850 N*m, the planned service interval is up to 100,000 km.
⠀
The launch of the R6 gas engine into mass production is planned in 2022.