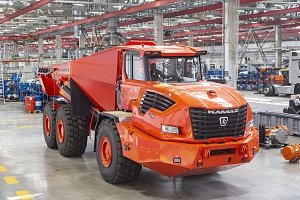 “KAMAZ” PTC together with the Bauman Moscow State Technical University have developed a unique articulated dump truck KAMAZ-6561, designed for quarry work in an autonomous mode.

The development of the quarry dump truck was carried out within the framework of the project “Creation of a family of electromechanical unmanned dump trucks of large capacity in the interests of the extractive industries of the Russian Federation”, performed with the support of the Ministry of Science and Higher Education of Russia.

The KAMAZ-6561 dump truck, named Hercules, is made according to the “serial hybrid” scheme, i.e. it is an autonomous electric vehicle that does not require recharging from an external network. The internal combustion engine drives an electric generator, which provides energy for the traction motor and charges the battery. The serial hybrid runs in places on pure electricity with a charged battery and, thus, is very close to an electric vehicle. In case of the KAMAZ-Hercules truck, energy recovery will occur when descending into the quarry, and when climbing up with a load, the accumulated energy in the batteries helps the truck to climb uphill. This solution allows you to reduce the amount of fuel consumed by 15 % in comparison with the diesel analogue.

The length of the dump truck is 10,120 mm, width – 3,430 mm, height – 4,030 mm. The curb weight of the chassis is 31 tons, and the load capacity is 40 tons. A truck with a 6×6 wheel formula is designed for the transportation of bulk cargo over rough terrain and dirt roads. It can also be used in the development of quarry deposits and mines, for the extraction of minerals using unmanned technology. To do this, the ADAS level 5 system is provided on board, which ensures movement in the quarry in an autonomous mode, without the participation of a driver. Also, the dump truck can be operated both in remote control mode and controlled by the driver from the cab.

KAMAZ-Hercules has an articulated frame with two degrees of freedom in the joint node, which reduces the likelihood of wheels hanging out when driving over rough terrain and reduces the load on the load-bearing system. This allows you to install large-sized tires and provides an acceptable minimum turning radius, which significantly increases the cross-country ability and maneuverability of the dump truck.

Currently, specialists of KAMAZ PTC and Bauman Moscow State Technical University are preparing the dump truck for landfill tests. After the completion of the tests, the dump truck will be sent for trial operation to the companies of extractive industries.