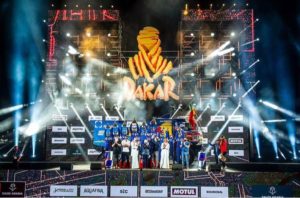 The 12th and final stage of the Dakar 2021 rally marathon in Saudi Arabia was held on Friday, January 15, on the Yanbu-Jeddah route.

The winner of the Dakar in the cargo category for the first time in his career became Dmitry Sotnikov. The second place in the race was taken by Anton Shibalov, the third by Ayrat Mardeev. Andrey Karginov finished the rally seventh.

The last time the KAMAZ-master team took the first three places at the “Dakar” back in 2015. The championship title is the 18th in history for the team!