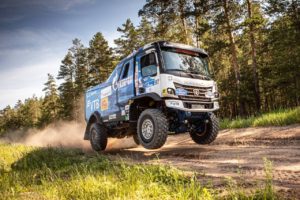 At the press trip of the Russian state media in Naberezhnye Chelny, KAMAZ-master announced its crews to take part in the Silk Way Rally 2022 covering the Russian territories and scheduled for July 6-16.

The rally route consisting of 10 stages was mapped on the territory of Russia with a start in Astrakhan and a finish in Moscow. The racing track will link several regions of our country at once. The Republic of Dagestan and the Chechen Republic will host the rally-raid competition for the first time in the modern auto racing. The geography of the route is rich in a variety of terrain – from Astrakhan sands to mountainous special stages in the Caucasus.

The total length of the competition route will be 4,500 kilometers 2,800 of which are sports special stages. On July 16, the winners of the race will solemnly cross the finish podium in Moscow.

Pre-launch events of the rally – administrative checks and scrutineering – are scheduled for July 6. The starting podium will take place in Astrakhan on July 7 after passing a short qualifying high-speed section laid in the city area on the banks of the Volga River.

Eduard Nikolaev and Dmitry Sotnikov will drive new KAMAZ-435091 racing trucks of the K5 family. Andrey Karginov’s crew will perform on the time-proven KAMAZ-43509. Also, the off-road will be challenged by the crew of Sergey Kuprianov who will perform on a KAMAZ truck using a gas-diesel mixture as a fuel.

At the end of the Dakar 2022, the scope of work aimed at improving the dynamic properties and increasing reliability of the trucks was determined. Many solutions have already been tested during the second stage of the Russian Rally Raid Championship in Volgograd Oblast and additional tests of the team on the Astrakhan tracks. The relief and nature of these “home test ranges” are just perfect for testing trucks and crews for endurance.

“The Dakar Rally 2022, the training in the Astrakhan region in May and the Archeda Baja in Volgograd gave the team many different technical ideas that are actively being implemented,” said Sergei Savostin, the team’s deputy director for production and development. “Each truck on the Silk Way will have its own challenges. It is important to study and test as many engineering solutions as possible. The route from Astrakhan to Moscow will show what innovations will remain and will be introduced in the future.”