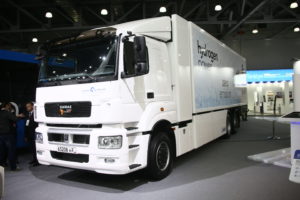 KAMAZ, Russia’s top forward-thinking truck maker, and GreenGT, Switzerland’s pathbreaker in the design and development of high-power electric/hydrogen systems for transportation and motor racing, have signed a Memorandum of Understanding to develop hydrogen-powered electric industrial trucks.

Today KAMAZ and GreenGT are demonstrating a 44-tonne testbed truck with a 170 kW hydrogen fuel cell system with two batteries generating 85 kW each. There are two versions of this sample vehicle with 12 and 6 large hydrogen tanks, with a total storage capacity of about 45 kg of hydrogen. This zero-emission 570 hp vehicle has a 500 km range and can be recharged in less than 15 minutes. The prototype presented in Moscow is a 6×2 version based on the KAMAZ chassis. The fuel cell system was developed fully by GreenGT.

This prototype vehicle is the first step towards the pre-series production of vehicles to be assembled in France and Switzerland for the largest European logistics and distribution companies.

The official demonstration is to take place at the transport fair in Bern, Switzerland, from 11 to 13 November 2021.

The companies both have a passion for motor racing. KAMAZ is an 18-time winner of the Paris-Dakar rally among trucks. GreenGT, on the other hand, is highly experienced in hydrogen motorsports, which is proved by its flagship projects (LMPH2G and H24) for Mission H24 at the 24 Hours of Le Mans during which their prototype covered more than 10,000 kilometers on the track.