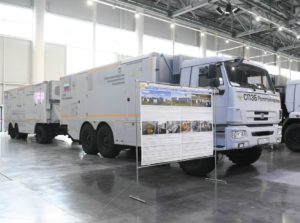 KAMAZ vehicles became the basis for Russian mobile complexes of specialized anti-epidemic brigades (SPEB) used in the international simulation exercises of the World Health Organization, which took place on the territory of the Kazan Expo exhibition complex.

SPEB is a KAMAZ with trailers hosting laboratory modules. As Anna Popova, Head of Rospotrebnadzor, noted at the beginning of the exercises, Russia uses mobile laboratories in emergency situations, during sports championships and other mass events. Such vehicles operate not only in Russia, but also in several CIS countries, in Vietnam and Africa. They became widespread in the world during the COVID period because, according to Anna Popova, they helped introducing international sanitary regulations. Kazan was chosen to welcome 120 representatives from 20 WHO member countries because it offers suitable logistics for air delivery and placement of KAMAZ-chassis laboratories in closed spaces.

The international exercises in Kazan were the first of their kind. They aim to standardize field work and emergency care in the face of epidemics. According to the legend of the exercise, there is an outbreak of a certain infection in one of WHO countries. And the participants have to identify an infectious agent. Subsequently, the actions worked out during the exercises will determine the uniform WHO instructions for countering the spread of infection in any country.