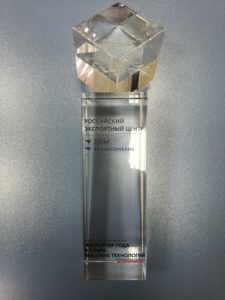 KAMAZ became the winner of the regional stage of the competition for the winners of the all-Russian award Exporter of the year 2018. The award ceremony was held in Perm as part of the Second interregional export forum.

The competition is organized by Russian export center together with the Ministry of industry and trade of the Russian Federation and is held in eight Federal districts in two stages. Within the framework of the district stage, KAMAZ took part in the number of enterprises of the Volga Federal district, in the nomination Exporter of the year in industry and has won the competition. During the second, Federal stage, the company will compete with winners and prize-winners from other Russian regions.

Director General of Foreign Trade Company KAMAZ Rafail Gafeev said that this year the organizers of the competition Exporter of the year expanded the list of parameters for assessing the activities of exporters. Thus, in addition to export revenues, other important criteria were taken into account, according to which KAMAZ demonstrated excellent performance in 2018.

For example, a wide range of KAMAZ exported products, the emergence of new countries for export, the creation of KAMAZ right-hand drive cars for South Africa and Indonesia, obtaining international patents for their own inventions, the developed dealer network of KAMAZ PTC abroad, covering 35 countries, and much more were taken into account. Today KAMAZ exports its products to more than 50 CIS countries, Southeast Asia, the Middle East, Africa, Europe and Latin America. And the task of developing new markets remains urgent and paramount for the company.

National award in the field of international cooperation and exports “exporter of the year” was initiated at the highest level – the National project International cooperation and exports, which was developed pursuant to presidential Decree About the national goals and strategic objectives development of the Russian Federation for the period up to 2024. The nomination Exporter of the year is awarded to organizations and individual entrepreneurs who have achieved the greatest success in the export of non-primary non-energy goods, works, services, as well as the results of intellectual activity.