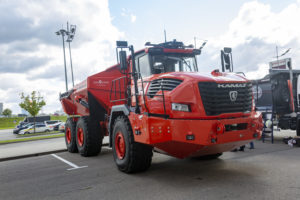 The non-public presentation of the Hercules took place at the end of June, and it is the first time when the general public and potential consumers have access to this dump truck. The vehicle is mainly designed for transportation of bulk cargo off-the-highway. It can also be used in quarrying and mining, as well as in unmanned mineral extraction. This is possible due to a 5-level ADAS system on board, which provides autonomous driving in a quarry, without a driver. The dump truck can also be operated both remotely and by the driver from the cab.

The truck is made as a “series hybrid”, which means that it is an autonomous electric vehicle that does not require recharging from an external network. The combustion engine drives the electric generator which powers the traction motor and charges the battery. The series hybrid occasionally runs on pure electricity with a charged battery and is thus very close to an electric vehicle. The KAMAZ-Hercules vehicle recovers its energy by running down into the quarry, and this energy accumulated in batteries helps the loaded truck by climbing up the mountain. This solution reduces fuel consumption by 15% against that of diesel trucks.

KAMAZ designers made the cab of the dump truck as comfortable and safe as possible. It features an on-board computer, a monitor, several buttons to switch driving modes and to control unloading, and its reinforced cab protects the driver in case of a rollover. The driver can use a large number of outdoor devices too. There are outer sensors, radars, lidars, video cameras making the vehicle almost a robocar.

“The Hercules will soon be tested in the quarry of a mining company. Testing will last from three to six months,” said Sergey Nazarenko, Chief Designer of Innovative Vehicles at the KAMAZ Scientific and Technical Center. “The experts will assess fuel efficiency, towing and dynamic performance, weight and dimension characteristics, one-filling diesel fuel capacity, electric range, truck capacity, minimum swing radius, visibility, ergonomics and motor vehicle performance. With test results on our hands, we’ll modify the truck, and then transfer the Hercules to Ural Mining Metallurgical Company (UMMC) for trial operation in Bashkortostan.”

According to Sergey Nazarenko, this dump truck serves as the basis for the development of new versions. For example, the market is waiting for its diesel version KAMAZ-6558 the sales of which are scheduled for 2024.