The first test runs of the KAMAZ-4308 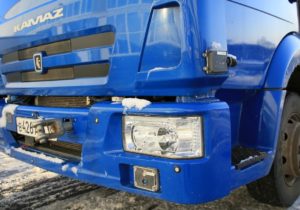 The first test runs of the KAMAZ-4308 unmanned vehicle began at The KAMAZ factory. The truck will learn the logistics of supply of cabins from the frame and stamping plant to the automobile plant without the driver.
⠀
The transportation of components by the means of cars-robots project received the name of the “Odyssey”. So far, we are talking about logistics operations on the roads within the perimeters of the industrial site of KAMAZ. In general, such machines can be used in any industry, where shuttle transportation is required along specified routes.
⠀
“Unmanned technologies are the future that Rostec enterprises are actively approaching. In particular, “KAMAZ” creates several types of autonomous vehicles: transport, providing the movement of convoys without drivers, cab-free electric vehicles and urban shuttles with autonomous traffic systems. Unmanned truck, which began to work at the site of the enterprise, is highly accurate — navigation error does not exceed 3-5 cm. The launch of the project is a significant event not only for the Russian automotive industry, but also for the industry as a whole. This may be the first step towards the robotization of industrial equipment, including those operating in extreme conditions – for example, in mines, quarries and in the Far North,” said Sergey Chemezov, the CEO of Rosteh State Corporation, the Chairman of the Board of Directors of KAMAZ PTC.
⠀
The “Odyssey” assembled on the basis of KAMAZ-4308 diesel car. The machine is equipped with four types of sensors: video cameras, radars, lidars and sonars. The robot is equipped with several communication systems: industrial Wi-Fi, 4G and a special VHF band in case other communication channels are muted, that is, an emergency channel. All data from the sensors are fed into the brain of the machine-the computer, where the analysis of incoming information about the parameters of the movement will take place.