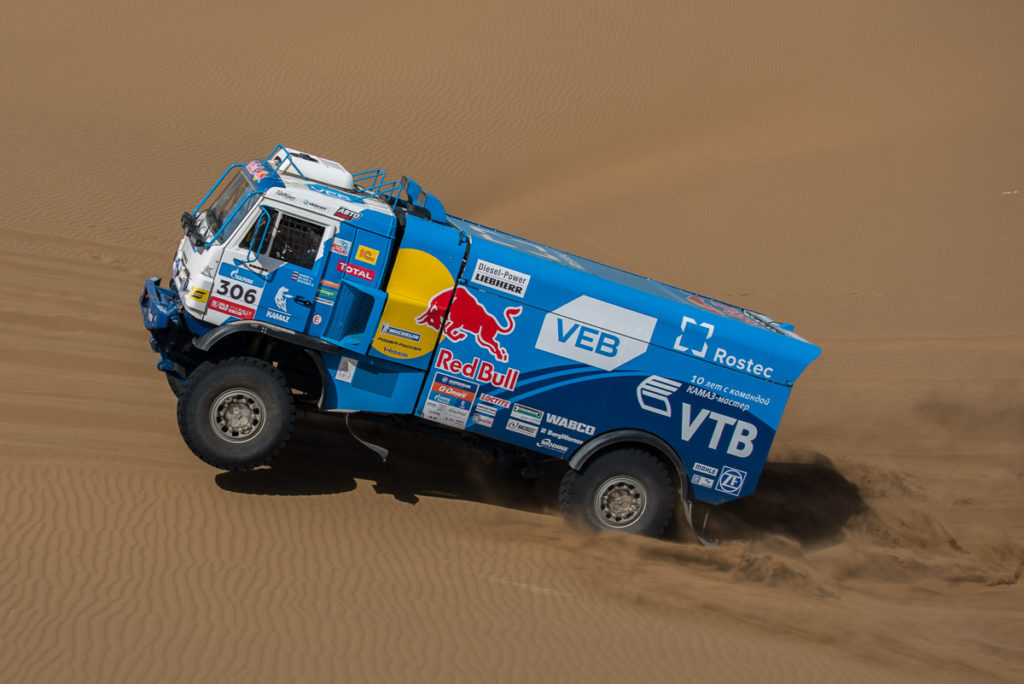 After the 9th leg the whole podium in the truck classification was taken by KAMAZ-master crews. Airat Mardeev was first to win challenging dunes and impassibility from Urumchi to Hami at 50 degrees of heat.

“At the start we understood that it was going to be very hot and took more water with us,– tells the pilot. – I was second to start among trucks just after the winner of the previous leg Martin van den Brink. I had a target to catch him up and I was very surprised when I saw our rival on the 40th km. (The length of the stage is 719 km, the length of the special is 384 km). The stage was good – sands were very interesting to pass. You were free. But there were a lot of dangerous places as well. We saw a big sand swirl, drove around it and descended carefully. I thought then that somebody would definitely stick there. When we were leaving the sands, we outran Brink  and came to the finish first.”

Premonition of Airat didn’t lie. The crew of Andrey Karginov #314 turned over. This race he was a kind of assistance for his teammates, he was going last among KAMAZ crews. Now he needed help but nobody stopped, and his teammates were already far. Fortunately, nobody was injured. “It is not obligatory to help if people are safe, – says the manager of the team Sergey Savostin. – The crew of Andrey Karginov is in the sand since the very morning. It is very difficult to right their overturned truck and it is difficult to get to this place, too. You need a prepared vehicle and crew to do that. We sent our assistance to that place but when the route will open is not clear. I don’t think that it is the end for Karginov. We will bring him to bivouac, repair the truck and if the race authorities will allow all the stuck in the sands participants return, we will continue our battle. I have no doubt in it. The participants will certainly have the time penalty, and the participants won’t be able to show a good result, but they will try to pass challenging legs.”

Eduard Nikolaev #310 didn’t have such a good day as he intended: “The race organizers mapped correctly the route, because first 5-7 km were easy and every next kilometer became more and more challenging. There were some ‘loops’ which we couldn’t pass from the first time. We were driving on dunes very carefully in order to make no mistakes. We heard a noise, thought that it is a problem with the turbine. We worried that the turbine could break and it takes a long time to repair it. We decided to lose momentum. However, when we left sands we realized that everything was alright. So it could be an external noise. I drove very fast, we were catching up my team, overran Martin van den Brink. And when 30 km left to the finish, our back wheel exploded.  Our truck started shaking. We are lucky not to get overturned. It seems as if when we were saving the turbine, our tires were overheated. Because there couldn’t be any punctures in that place. It also may be because of the heat. So, in general we lost time again.” Eventually, the crew of Nikolaev finished the second. After him Dmitry Sotnikov (#300) and Anton Shibalov (303) came to the finish line.

As Dmitry Sotnikov told us, today’s special reminded him Chilean sands and straight roads were like in Morocco. “There’s nothing alive, as if it is a space landscape. We could hardly ‘survive’ in that heat. A lot of vehicles were overheated. I think that our Dutch rival was overheated too, therefore he continued his travel slower.”

Sergey Savostin said that Anton Shibalov goes in a stable way. He has a new truck which was created after the bonnet truck.

“I am sad that the last stage the crew had a breakdown, Anton Shibalov didn’t achieve his goals.”

By the way in the general classification KAMAZ takes two leading positions, crews of  Airat Mardeev and Dmitry Stnikov go straight after Van den Brink on the second and third positions. But specials become more and more challenging day by day. The tenth leg will lead the contestants to Dunhuan and sacred caves. There will be 525 km during the stage, 340 km from which will be ground tracks and canyons. During the leg the sportsmen will achieve 2 thousand metres above sea level.