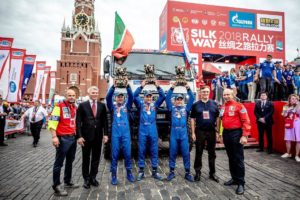 The international “Silk Way Rally 2019. Russia-Mongolia-China” rally-marathon starts on July 6 in Irkutsk. This year KAMAZ-master team will be represented at the international race by crews of Andrey Karginov, Anton Shibalov, Ayrat Mardeev and Sergey Kupriyanov. In addition, the traditional Russian-Chinese crew will perform on KAMAZ sports truck, its members will be announced later.
⠀
The preparation of the team for the July start of the Silk Way Rally is already in its full swing. It includes the introduction and debugging of new technical solutions, crews training, including testing new candidates for the position of navigators and mechanics. In addition, it is planned to participate in a number of competitions, the first of which in the new season will be the stage of the Russian Championship “Gold of Kagan”, which will be held in late April in Astrakhan.