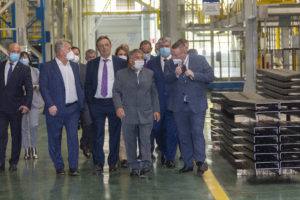 Being on a working trip to Naberezhnye Chelny, Rustam Minnikhanov, President of the Republic of Tatarstan, has visited KAMAZ PTC.

The guests saw a large-scale reengineering project under way at the KAMAZ press and stamping plant: there is a new modern production facility built to produce frames with high corrosion resistance and strength properties for a new KAMAZ truck line.

This production facility has three lines: an automatic line producing frame side rails, a line painting frame side rails and frame parts, as well as a frame assembly line. The quality of the frames is now higher thanks to the modern equipment and tools. An automated component transfer system will deliver components to the desired position timely and transmit data on the current remainder on the assembly line. The new technologies will enable to produce frames for all KAMAZ vehicles produced by the company. The new production is 70% automated. The production capacity is 65 thousand frames per year.

The president also examined the cab assembly line and the main conveyor of the automobile plant. He also met with the workers of the plant. The KAMAZ employees managed to ask the head of the republic their questions. In particular, the workers were interested in the issues of development of their enterprise, including export promotion.

The president noted that KAMAZ is known not only in Russia, but all over the world. At the same time, trucks, especially those of the new K5 generation, are competitive. “We are actively working with other countries: with Central Asia – Kazakhstan, Turkmenistan, Uzbekistan. There are certain prospects in working with Turkey,” said Rustam Minnikhanov. “A lot is being done for the development of your company. The government and the president support you. But the most important thing is that KAMAZ, due to its properly structured work, is in no way inferior to its foreign competitors.”