A ROBOTIZED KAMAZ IS CREATED 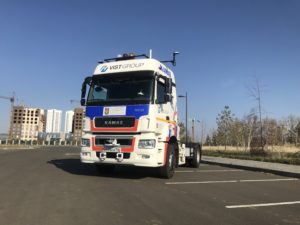 To implement the project, KAMAZ provided one of the new popular cars in the company’s product range – KAMAZ-5490 NEO. At the first stage of the project, the employees of the VIST Group company unit responsible for robotic systems, partially refitted the car and prepared it for  autonomous movement. The truck has a set of systems for providing autonomous movement, a significant part of which is the company’s own development. For safe movement and scanning of the environment, the car was equipped with lidars, radars and a positioning system of the Continental, Quanergy, Trimble world’s leading manufacturers.

As part of the first stage tests were performed at a special training ground located on the territory of the Skolkovo innovation center.

“For the VIST Group, the truck tractor is a new unmanned platform that increases our competencies in the field of robotic technology. Interest in the introduction of unmanned transport among industrial enterprises is increasing, which allows us to offer more comprehensive solutions for their digitalization,” commented Dmitry Vladimirov, CEO of VIST Group.

At the second stage of the project specialists from Nazarbayev University joined the completion of an unmanned tractor at a test site in Kazakhstan. Developers from Kazakhstan added a computer vision system to the functionality of the car which allows the car to recognize various objects – people, animals, road fences, markings, as well as independently rebuild the route taking into account the detour of these obstacles.

“The project is unique in the context of Kazakhstan and partly even ambitious, but so far it is a question of technology transfer and development of competencies. Despite the fact that the project is quite complex and high-tech all the tasks were carried out in close collaboration with the engineers of VIST Group. The project team has about 20 people, most of whom are students, undergraduates and doctoral students of Nazarbayev University. The accumulated experience will become the basis for further development in the field of unmanned vehicles, both in terms of research and in terms of potential generation of know-hows and commercialization of technology,” commented Zhandos Isenbaev, the project supervisor.

The development of robots in the truck class will make it possible to use them for transporting goods inside industrial facilities, as well as implement comprehensive programs for the digitalization of enterprises, which are handled by the Digital Group of Companies, the KAMAZ’s partner.