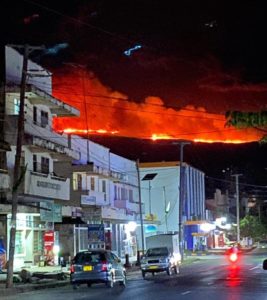 Three four-wheel drive KAMAZ-4326 (4×4) trucks are involved in the elimination of fire in Tanzania on Mount Kilimanjaro.

The second week is fighting the fire on Mount Kilimanjaro. Initially, the fire engulfed more than 100 square kilometers of slopes at an altitude of more than 2,500 meters above  the sea level. The unique ecosystem of Kilimanjaro National Park and its tourist infrastructure are under threat. According to the emergency response operations center, large ignition points of fire have now been eliminated, but there are still isolated fires in the Mandara Camp area.

KAMAZ all-wheel drive vehicles, which have been delivered to Tanzania since 2016, have provided great assistance to the fighters against the elements. From the first day of the fire to the present, three KAMAZ-4326 (4×4) four-wheel drive cargo and passenger trucks, recruited from the College of African Wildlife Management, are involved in the main mechanized transfer of people, food, and materials. This was possible due to the exceptional technical characteristics of KAMAZ vehicles: trucks from other manufacturers were unable to operate in conditions of steep slopes, rough terrain and heights of Kilimanjaro. According to a representative of Motorstan Distribution LTD (ALFORTA GROUP), a KAMAZ dealer currently located in Tanzania, the employees of the services involved in extinguishing the fire were literally amazed and delighted with the capabilities and possibility of Russian KAMAZ trucks.

Currently, the issue of operational preparation of a fire-fighting complex based on KAMAZ four-wheel drive vehicles for the benefit of the Ministry of natural resources and tourism of Tanzania is being worked out for the subsequent use of this vehicle in order to prevent and improve the effectiveness of combating such emergencies. These fire protection systems will also be offered to the fire service of the Ministry of the interior of Tanzania.