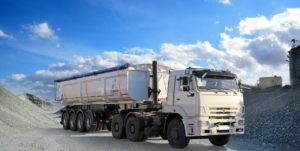 The KAMAZ-6460-21 and KAMAZ-65806-93 tractors based on the KAMAZ and Daimler component bases, respectively, as well as the four-axle TONAR-952363 tipper semi-trailer rear unloading trailer, were transferred to the Senegalese company West African and Russian Industrial Group (WARIG). An agreement on the supply of test samples of equipment was reached between the Foreign Trade Company KAMAZ (VTK), TONAR and WARIG during negotiations at the Russia-Africa summit in Sochi in October last year.

Despite the difficult situation in the economies of many countries in connection with the epidemic of coronavirus, KAMAZ continues to fulfill its obligations, including under previously signed contracts. The equipment will be delivered by sea: in April it was shipped from the port of St. Petersburg to the port of Dakar, Senegal. The tractors and semitrailer were delivered in collaboration with WARIG, with which VTK continues to work as part of the Senegal fleet renewal program. In 2020 with WARIG S.A. It is planned to sign a dealership agreement.

In general, the business relations between KAMAZ and Senegal began to develop back in 2003. In 2017, the CEO of the company, Sergey Kogogin, met with the President of the Republic of Senegal, Macky Sall, in Dakar. Then the parties discussed the prospects for cooperation and issues of financing projects of mutual interest. Delegations from Senegal also visited KAMAZ several times – over the past three years, the Minister of Fisheries and Maritime Affairs of the country Umar Gue, the Senegal’s ambassador to Russia Abdul Salam Dial, the president of the Association of Mayors of Senegal Aliul Sall, the president of WARIG Abdoulaye Sow and others have visited the plant. The guests personally got acquainted with the production of trucks, studied the lineup of KAMAZ vehicles and held a series of negotiations on the prospects for cooperation.