KAMAZ AT THE SUMMIT «RUSSIA-AFRICA» 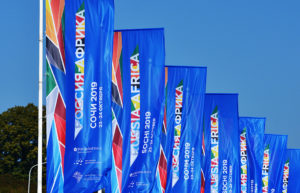 Top managers of KAMAZ are taking part in the business program of the Russia-Africa summit and the economic forum timed to it, which ends today in Sochi.

Russian President Vladimir Putin, speaking at the summit, noted the importance of this business event aimed at developing trade and economic ties between the countries. The head of state expressed hope that during the forum new directions and forms of cooperation will be outlined, promising joint initiatives will be put forward that will bring the interaction between Russia and Africa to a qualitatively new level. Within the framework of the unprecedented summit, more than 50 African heads of state and more than 8,500 representatives of government and business discuss the broad economic and investment agenda of relations between Russia and the States of the African continent, including the supply of equipment and vehicles to Africa.

The plenary session «Russia-Africa: unlocking the potential of cooperation», held on October 23, was attended by Director General of KAMAZ Sergey Kogogin and CEO of foreign Trade company KAMAZ Rafail Gafeev. Also, the head of the export direction became a participant of the sessions «Transport infrastructure on the African continent. Prospects for joint projects» and «Holding business in Africa: opportunities, conditions and risk».

Today, on the second day of the forum, top managers of KAMAZ held talks with President of Senegal Maki Sall. In addition, there were meetings of KAMAZ with the delegations of Ghana, South Africa, Guinea, Egypt, Angola and Mozambique.

The exhibition space of the forum demonstrates Russian breakthrough developments and flagship projects that are in demand for the needs of African countries. The leader of the Russian cargo engineering industry presented the KAMAZ-6520 dump truck, which successfully proved itself in the markets of Guinea, Liberia, Ghana, as well as the KAMAZ-43118 onboard, used by international organizations to ensure the delivery of humanitarian goods to remote regions in Uganda and Ethiopia.

The possibilities of Russia in the field of prevention and control of infections were presented, including the example of mobile laboratories on the basis of KAMAZ. Currently, such complexes are already used in Guinea and Vietnam, and deliveries to Mongolia will begin in December. Participants and guests of the forum had the opportunity to see the laboratory, get acquainted with the technical characteristics.