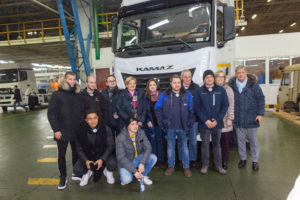 In the framework of the Council for Professional Qualifications in the Automotive Industry at NP Association of Russian Automakers, KAMAZ took part in a Russian-German project for joint professional exams for college graduates with qualifications in Automechatronics.

The National Agency for the Development of Qualifications of the Russian Federation, the Association of Russian Automakers, KAMAZ PTC, the Ministry of Education of the Federal Republic of Germany, TÜV Rheinland Group, and the Russian-German Chamber of Commerce were the participants in the Russian-German project. The project manager from Germany was Katya Kaiser, the representative of TÜV Rheinland Akademy GmbH, from KAMAZ – Svetlana Mikheeva, the director of the Personnel Development Department.

This year, in October, three students of the V.Potashov Technical College and two students of the L.Vasilyev Kama State Automotive College were in Berlin where they passed a theoretical and practical exam in their specialty at the TÜV Academy site according to the educational standards adopted in Germany. Despite the language differences they did a great job.

Three weeks later German students arrived at KAMAZ to pass the exam according to the Russian standards. During the visit, guests were taken to the training centers of the company – V.Potashov Technical College, Multifunctional Center for Applied Qualifications of Mechanical Engineering, with a study tour, the guys visited the business incubator of the IT Park. In addition, students saw the work of the main assembly line and the cabin assembly line at the automobile plant, and they were also able to ride in the cabin of the KAMAZ-54901, the flagship of the new model range.

According to Svetlana Mikheeva, the Director of the Personnel Development Department, the guests were very impressed with the established sites created at KAMAZ. “They were pleasantly surprised by our training base, modern equipment. Of course, this is a large-scale personnel policy, this is management support, financial investments. But we are doing this because we understand: the quality of our final product depends on the quality of work of each specialist. Our lineup is dynamically changing, and training becomes an important element in the quality of KAMAZ products. Despite the robotization of production, man remains the main link in this matter,” Svetlana Mikheeva said.

In addition to the excursion program students also had a demonstration exam for the qualification of “Automechatronics”. A theoretical exam was organized for them on the device, maintenance and repair of the car, including its control system at the KAMAZ training center, the Regional Institute of Advanced Technologies and Business.

The practical part of the exam was held at the Educational and Technological Complex located at the engine factory. Here students had to complete three blocks of tasks, each of which was limited in time – carrying out pre-sale preparation of the car, disassembling, assembling and troubleshooting the engine, as well as checking the technical condition and troubleshooting in the electro-pneumatic suspension.

As noted by Svetlana Mikheeva, the company plans to broadcast the requirements of international educational standards to colleges involved in the training of specialists for the automotive industry. This will allow educational institutions to quickly make changes to their educational programs, and service centers subsequently do not have to deal with the preparation of graduates, they will receive almost ready-made specialists.