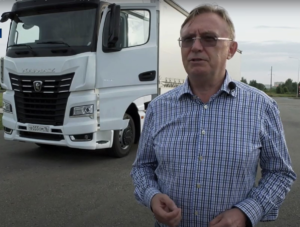 In the development block of KAMAZ PTC, a training instruction has been developed for drivers of KAMAZ-54901 cars, which allows them to develop an economical driving style. Director General of KAMAZ Sergey Kogogin personally tested the method and confirmed that fuel efficiency depends on the driving style.

After driving a KAMAZ-54901 mainline tractor along a section of the M7 highway, Sergey Kogogin tested the new model in conditions close to real operation. The Head of the car giant, who has the appropriate driver’s category, took part in the experiment with great interest, and then became a participant in a briefing on the fuel efficiency of the new model range. The KAMAZ-54901 car was to drive from Naberezhnye Chelny to Mamadysh, pass instruction and use the acquired knowledge on the way back to Naberezhnye Chelny. After completing the route, a full analysis of Sergey Kogogin’s driving style «before» and «after» training was conducted in the mobile laboratory.

Before the experiment, Deputy General Director of KAMAZ for development Irek Gumerov recalled that the car has a component of the satellite monitoring and control system for the operation of vehicles ITIS-KAMAZ. Its algorithm recognizes what acceleration and deceleration was performed on the terrain and on uniform sections of the route. Then the driver’s behavior is evaluated on each of them, and a graph is created. The color scheme shows the fuel consumption: the more green color, the lower the consumption, and the closer to the red spectrum, the higher the fuel consumption.

The one-way route was 97 km long. The total fuel consumption in the direction of Mamadysh was 31.2 liters, respectively, the specific fuel consumption per 100 km – 32 liters. The target consumption (this is the indicators of the top 10% of drivers who drove on the same section) is 28 liters. It turned out that the head of the car giant spent four liters more than the reference figure. Why did this happen? One of the reasons – cruise control was not used (this is an extra consumption of 1.5 liters of fuel per 100 km), the second – making sharp decelerations, the third – not using kinetic energy on ascents. As a result, compliance with the standard driver level was 50%.

The return trip took place after the briefing. According to the analysis, compliance has increased to 80%, and the average specific fuel consumption per 100 km has significantly improved.

«We have started selling trucks of the new generation KAMAZ-54901, we declare very serious characteristics, and it is important which driver gets behind the wheel. Poor driving can ruin the work of our entire team, and the client will not get what we promised him. Today we set up an experiment: I, a non-professional truck driver, drove as I understood the road. I am convinced that the training system that we offer to our clients together with the car allows us to prepare the driver in a short period of time to achieve very good results», – commented Sergey Kogogin.

According to Irek Gumerov, together with MITTU, the KAMAZ training center, it is planned to create an adapted course for drivers of KAMAZ-54901.