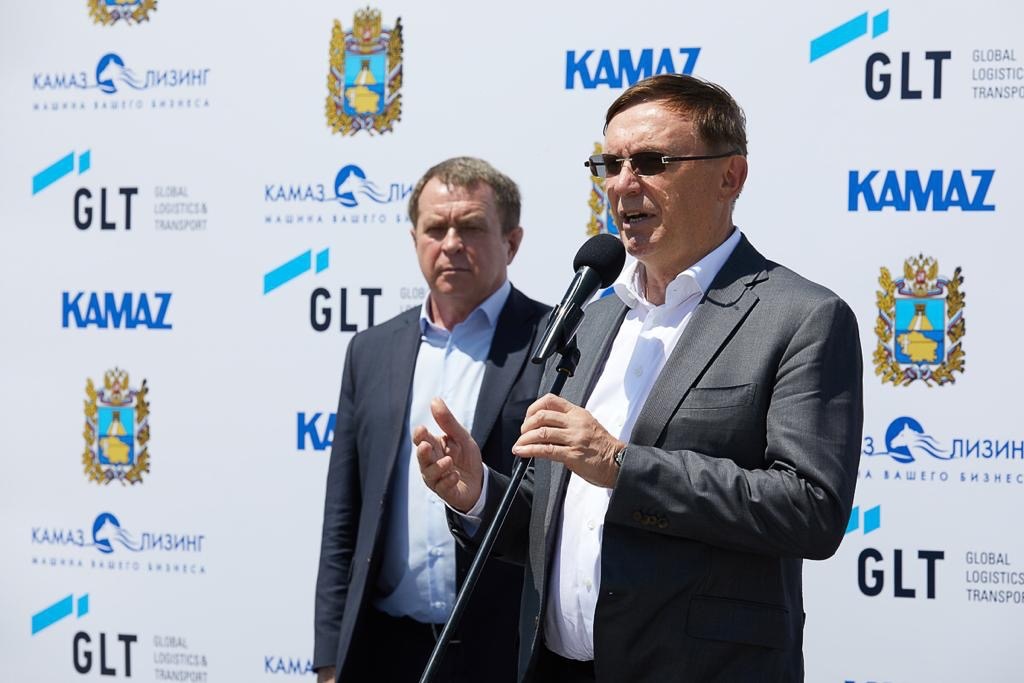 The General Director of KAMAZ Sergey Kogogin took part in the event on the occasion of the handover of KAMAZ-5490 gas-diesel tractors to the GLT transport company (Stavropol territory).

Among the participants and guests of the event were also the First Deputy Chairman of the Stavropol territory Government Ivan Kovalev, the General Director of KAMAZ leasing company Andrey Gladkov, the Minister of Road and Transport of the Stavropol territory Evgeny Shtepa, the Executive Director of the GLT transport company Pavel Gorbunov and others.

The event which took place at the site of the GLT service center in the Stavropol territory was timed to the acquisition by the transport company of the next batch of 265 KAMAZ-5490 gas-diesel tractors. Equipment purchased as part of trailers, which include trailers of the production of NEFAZ, the subsidiary enterprise of KAMAZ in the Republic of Bashkortostan.

By June 14, the company has already received 100 road trains. Leasing partner of the transaction was KAMAZ leasing company.

“I am very pleased to be here today and take part in the transfer of our cars, as GLT is the company that once said that it will work on our equipment, and for almost four years we are going along this path together, – said Sergey Kogogin, the participants of the solemn event. – GLT has become one of the leaders in the development of natural gas fuel, which gives significant savings to business and helps to protect the environment.”

He also noted that the gas-diesel KAMAZ-5490 is one of the most popular models in the line of products of the auto giant, which promises significant savings to its owners due to the replacement of diesel fuel with gas. This is an alliance of several of the most successful solutions of the company. And the use of these cars together with NEFAZ trailers makes the acquisition doubly effective.