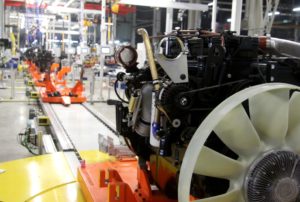 As part of the Tibet project’s second stage of the, KAMAZ specialists are working to increase the production of new inline six-cylinder engines to 30 thousand units per year with the expansion of the model range.

The decision to increase production to 30 thousand engines per year with the expansion of the model range due to the development of five new modifications of the R6 was made at KAMAZ in December last year. In the future, new engine modifications will be launched – gas, gas-diesel, and engine with increased energy efficiency, engine with a volume of 13 liters and, in the future, the engine of the ecological class Euro-6. Design documentation for these engines is currently being developed at the Scientific and technical center (NTC) of KAMAZ.

Recall that the project “Development and organization of production of a family of promising 6-cylinder inline engines with a working volume of 12 liters” (working name “Tibet”) was opened in the company in 2014. Its first stage was successfully completed in the fourth quarter of 2019 – a six-cylinder inline engine with a capacity of 400 to 700 HP, of the Euro-5 ecological class, was developed and put into serial production. Production facilities have been created for the production of 12 thousand engines per year. This power unit is intended for installation on promising models of KAMAZ vehicles and other equipment. The inter-service mileage is 150 thousand km; the resource is 1.5 million km.

Production of critical parts, assembly, testing and painting of the engine is carried out on the most modern equipment of world manufacturers – from Germany, Italy, England, and Austria. In 2019, a pilot batch of 151 units was released. Currently, the engines are undergoing operational tests as part of automotive equipment.

During 2020, the KAMAZ engine plant plans to produce at least 1 thousand engines of the new R6 family. Also, for the implementation of the second stage of the project, technical negotiations on the selection of equipment suppliers are planned for the current year. Contracts are expected to be signed in the fourth quarter of 2020, and equipment will be delivered in 2021. Development of production of five new modifications of P6 engines-in the future 2022-2023. 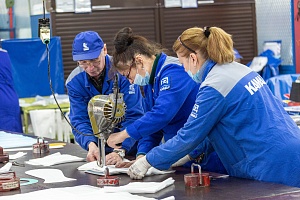 Every day, 50 anti-epidemic kits are handed over by KAMAZ to medical institutions in Naberezhnye Chelny.

As of yesterday, the city’s medical staff received 200 suits, the production of which is established at the auto giant’s factories. 180 of them were admitted to the city hospital No. 2, where the medical centre is deployed, and another 20 – to the ambulance doctors.

The costume consists of many elements. Dressing gown, trousers, helmet, apron, armbands, shoe covers must be disposed of after two hours of wearing.

“The costumes were delivered to our institution: they were brought personally by the head of the city’s health Department, Alexander Nikolaev, – said the chief doctor of the emergency medical service Station in Naberezhnye Chelny, Sergey Krylov. – Anti-epidemic kits are located in our filling rooms, where everything necessary for the work of medical teams is stored – medicines and medical equipment. And they are already used as needed: doctors wear them when they go on a call to a patient with symptoms of coronavirus. Thank you very much to KAMAZ for providing protection for our employees.”

Suits can also be used to transport patients with a confirmed COVID-19 diagnosis. 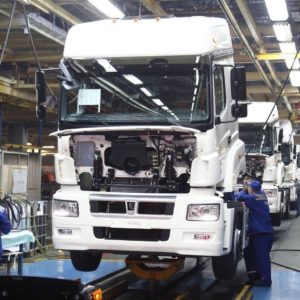 The plant, like the whole country, went into quarantine and suspended its activities. After negotiations with the Federal authorities, it was decided that the operation of KAMAZ ensures the transport safety of the country.