The twelfth edition of the International Silk Way Rally has come to its end. On Saturday, the final stage was held, and the names of the winners and prize winners of the race became known.

The tenth stage of the rally turned out to be rather short – only 120 kilometers of the special after which the racers had to travel 300 kilometers on a liaison from Lipetsk Oblast to Moscow. In order to keep their positions, the leaders had to take only reasonable decisions. But several fords were fraught with danger – yesterday’s story with several damaged trucks when crossing a river reminded the participants they shouldn’t relax.

From the first kilometers, the organizers of the race gave the navigators an opportunity to show their skills. To try to find the right direction, the crews had to run at a pedestrian speed. They were detained by the underbrush which hid the roads. The fastest to cope with all tasks was Andrey Karginov’s crew, the winner of the last stage of the Silk Way. They were followed by Eduard Nikolaev and Dmitry Sotnikov. Aspiring to the top position, Siarhei Viazovich had to replace the wheel at the finish and lost almost 20 minutes to the first place.

The minutes stored for thousands of kilometers during the race which had started in Astrakhan on July 6 helped Sotnikov finish on Saturday smoothly. As a result, the best among trucks is the crew of the KAMAZ-master team consisting of pilot Dmitry Sotnikov, co-driver Ruslan Akhmadeev, and mechanic Ilgiz Akhmetzyanov. This victory is the racer’s second in a row and fourth in his SWR career. No one won more victories in the history of this rally. Another fact: a truck crew has never won in the general standings of the Silk Way before. The second place of the race was taken by another crew of KAMAZ-master consisting of Eduard Nikolaev, Yevgeny Yakovlev, and Bogdan Karimov.

During the race, the gas and diesel KAMAZ steered by Sergey Kupriyanov showed itself to be good. The fast, reliable and eco-friendly truck built specially for the rally took third position on specials twice and second place once.

On Saturday night, the Luzhniki Olympic Complex hosted a bug concert, a finish podium and an award ceremony for the winners and prize-winners of the Silk Way Rally.

Dmitry Sotnikov, Pilot of Crew 300: “Our victory is the work of the whole crew and the team, and it was on a higher level. Everybody – mechanics, co-drivers – had a lot to bear at this race. I’m very happy. There were times when mechanics worked till the morning. At the second stage, we had a cardan torn off, we got stuck in the sand, and I thought: well, that’s all, we’ll try just to get to the fnish, but at that moment, something changed, and we solved the problem really quickly, and then things started looking up. We felt that we could fight, and the race was very difficult. We were lucky to win the “overall”. We are very glad about it.”

Eduard Nikolaev, Pilot of Crew 302: “I can’t believe that the race is over. Tomorrow we will start again, to come back home this time. This year’s race is super. I’d like to thank the organizers who managed to find an opportunity to carry out such a rally in our tough times. The route is very interesting, eventful, letting us learn more about our vehicles and ourselves. So, we are happy that everything worked out very well, that all guys are at the finish line.” 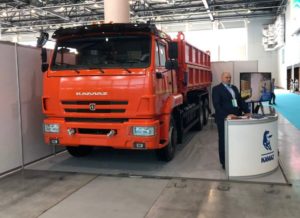 KAMAZ vehicles were presented at the International Exhibition Agrovolga 2022 that finished at the exhibition center Kazan Expo.

This year, the international agroindustrial exhibition gathered 415 companies from 42 Russian regions, as well as from Turkey, Belarus, South Korea, Australia and the Netherlands. The producers of agricultural machinery and spare parts presented over one hundred units of equipment. Opening the event, Marat Zyabbarov, Deputy Prime Minister of the Republic of Tatarstan – Minister of Agriculture and Food, noted that Agrovolga was a unique event for agriculture not only of Tatarstan, but also of Russia. The exhibition, as usual, had a rich business program. Key experts discussed urgent topics.

The presence of KAMAZ PTC on the market of the Russian agricultural complex is of strategic importance. The company renders significant support to the agricultural and other sectors of economy. At its exhibition stand, the top Russian truck maker demonstrated a KAMAZ-45143-48 (6×4) dump truck. The vehicle alone or as part of a road train is intended for transportation of various bulk cargoes, including agricultural ones, except hard rock and cobblestone.

The platform of the dump truck is metal with two-side hydraulic dumping, side flaps and an opening rear flap. The cab is all-metal, two- or three-seat, front tilt, over engine, soundproof and thermally insulated. There is one sleeping berth. The base tipping trailer NEFAZ-8560-02 is side-dumping and has a 15 cbm platform. The platform dump angle is 45°. 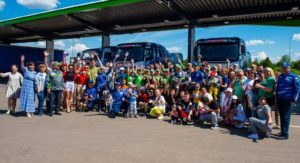 Last Saturday, the crews of the racing team KAMAZ-master started their way to Astrakhan where the international rally Silk Way is to launch on the sixth of July.

Eduard Nikolaev and Dmitry Sotnikov will pilot new racing trucks KAMAZ-435091 of the K5 line. Andrey Karginov’s crew will drive the time-tested model KAMAZ-43509. Besides, impassability will be challenged by the crew of Sergey Kupriyanov who will perform on a KAMAZ truck fueled by gas and diesel mixture. It should be recalled that the reigning winner of the Silk Way Rally among truck racers is Dmitry Sotnikov’s crew.

The rally Dakar 2022, as well as test rides in Astrakhan Oblast and the Archeda Baja held in May gave the team many different technical ideas for implementation. There were changes in a number of characteristics of the vehicles. Each truck in the Silk Way 2022 will have to undergo its own series of tests. It is important to study and test as many engineering solutions as possible. The route from Astrakhan to Moscow will show what innovations will prove to be good and be applied in the future.

As soon as the team came home from the Dakar, they started preparing for the Silk Way. The third racing truck of the K5 line was made in the team’s production shop for the start of the Archeda Baja held in Volgograd Oblast from May 19 to 22. As part of the joint project with PJSC GAZPROM, a new gas and diesel truck was made to carry Sergey Kupriyanov’s crew. In May, the truck was tested in a racing environment.

The team is supporting imports phase-out. It continues working on long-term strategic projects. The promising activities include the manufacture of racing trucks with power units on alternatives.

Scheduled from July 6 to 16, the 10-stage route of the rally Silk Way 2022 will stretch from Astrakhan to Moscow across Russia. The racing track will tie several Russian regions. And the Republic of Dagestan and the Chechen Republic will for the first time host a rally raid competition. The route is laid on terrain of various types – from Astrakhan sands to mountainous specials of the Caucasus.

The total length of the route is 4,500 kilometers, 2,800 of which are specials. Pre-start events of the rally – administrative and technical checks – are to be held on July 6. The starting podium is planned for July 7 in Astrakhan, after the racers pass a short qualification speedy section in an urban area, on the bank of the Volga River. On the 16th of July, the winners of the race will podium in Moscow.