AUTOMOTIVE KAMAZ FOR CONSTRUCTION OF FACILITIES OF THE UFA CITY INFRASTRUCTURE 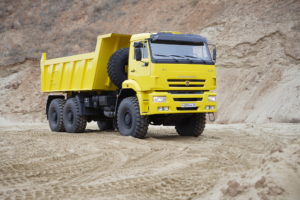 A large batch of KAMAZ trucks was delivered to the “Limakmarashavtodorogi” Turkish company to participate in the construction of a tunnel in Bashkiria.

Among the delivered 24 units of vehicles – KAMAZ-65222 all-wheel drive dump trucks, which will be involved in the “Eastern exit” project. We mean a transport corridor between the federal highways M5 and M7 through Ufa, which includes a highway, a tunnel, a bridge, and interchanges. Eastern exit is the most expensive infrastructure project in the capital of Bashkortostan over the past decades, the cost of which is estimated at 527.4 million USD.

The KAMAZ-65222 off-road truck is adapted for operation in rough terrain where the use of road equipment is difficult. Recently, many modifications have been made to the design of the dump truck, thanks to which this wheeled all-terrain vehicle has become widespread and in demand not only in Russia but also abroad. The vehicle is used in construction, agriculture, forestry, mining and road construction. Heavy dump truck KAMAZ-65222 is designed for transportation of bulk and piece goods with their subsequent unloading by lifting the body.

The advantages of the all-terrain dump truck include high cross-country ability, carrying capacity, and reliability. Even a fully laden truck is capable of driving off-road. Differentials and bollards provide uniform force transfer to the ground. The dump truck with small dimensions and low fuel consumption is capable of transporting up to 20 tons of various cargo to hard-to-reach areas. The components and assemblies of the truck are made with a safety margin. They can withstand high loads, extreme cold and heat. Electronics controls all indicators of components and mechanisms of the truck. The sensors provide timely signals to the driver about equipment malfunctions. Diagnostics is simplified, repair time is reduced.