A new load-lifting system on the аssembly line 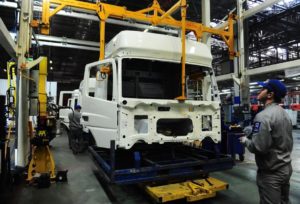 A new load-lifting system is being launched on the аssembly line for KAMAZ cabs of the new model range.
⠀
Previously, this position was a constant congestion: the cabin was hung on a crane beam, and the assembly was started by six people who attached the necessary parts, often staying in each others’ way. The frame moved to the next position only after 30 minutes.
⠀
Technologists decided to embroider the bottleneck: instead of one position, there are three positions with two people on each, and the conveyor now moves faster. The work became easier thanks to the new load-lifting system. Immediately after the logistics team sends the forthcoming cabin to the starting position, it is “inside” a special frame of the lift. While the pickers “form” the exterior of the lower belt, the system reliably holds the load at the desired height.